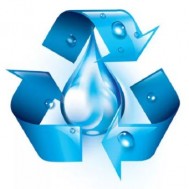 The scarcity of water is pushing up its price. As a result, water recycling is becoming increasingly important in many industries. In this article we discuss how Arvia’s unique technology can be a vital part of a much needed Zero Liquid Discharge (ZLD) system for water reuse.

Terms that we’re going to be hearing a lot more about over the next few years are ‘water poverty’ and ‘water stress’.

Essentially, something that we’ve always taken for granted – a seemingly limitless supply of water – isn’t so plentiful anymore. Some countries with large manufacturing bases are already suffering from extreme water shortages. Others will feel it very soon. In fact, a United Nations report says, by 2030 over half the world’s population will be suffering from severe ‘water stress’ unless water use is ‘decoupled’ from economic growth.

Water Poverty across the world

Water poverty is currently at its worse in Southern Europe and Asia. Singapore is a good example, as having no natural water resources, it is almost entirely dependent on rainfall or imports. Land is at a premium, so water storage is an issue. There have been several years in living memory when water rationing was imposed, the last being in 1990.

Population has almost doubled since: from 3 million then to approaching 6 million today. So it could happen again, despite the recent commissioning of its latest desalination plant, if the Met Office or National Geographic are to be believed.

The scarcity of water is also being reflected in its cost; in the UK we’ve seen both domestic and industrial water charges moving up steadily, but that’s nothing compared with some countries.

In a recent survey of US Cities, the rising costs of domestic water made uncomfortable reading, with water bills rising at almost exponential rates in many places, leading to disconnections and foreclosures.

There are several interlinked reasons for water poverty:

From Arvia’s point of view, this impending crisis (and we make no bones about it, it really is a crisis) is one of the reasons why we were set up in the first place – to clean and ‘polish’ industrial wastewater and purge it of some of those harmful compounds that other water purification systems struggle to treat.

The story behind Arvia

Dr Nigel Brown describes his lightbulb moment setting up Arvia thus: ‘Working on systems to remove low and trace levels of aqueous toxic organics it was apparent that current approaches were inherently unfriendly to the environment.’

‘With a background in water and wastewater treatment, experience in electrochemistry and knowledge of carbon materials, the idea of adsorption coupled with electrochemical regeneration was born!’

The technology behind the Arvia reactors and the unique Nyex™ process has been even more successful than Dr Brown originally envisaged and now Arvia’s systems has been proved to remove many hard-to-treat compounds from water – for the most up to date list see this page. 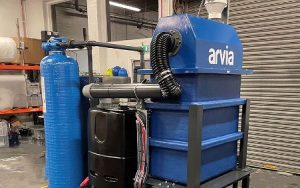 The consequences of water poverty

A lack of clean water will strike fear into the heart of every operations director. No clean water often means no manufacturing, so it’s as critical as consistent power or a reliable supply of raw materials.

Increasingly demanding regulations and the spiralling cost of fresh water means that industrial water treatment and wastewater recycling is starting to make a lot more sense, even when CapEx and OpEx are factored in. When capturing certain compounds, the efficiency of Arvia’s tertiary water polishing systems means it’s perfectly possible to aim for ZLD – zero liquid discharge – in an increasingly wide range of applications.

However, as the cost of clean water rises, as well as our understanding of the science and what relatively small concentrations of certain chemicals in water can lead to, aiming for Zero Liquid Discharge or ZLD becomes increasingly viable, and applicable to a growing number of industries.

When a Nyex™ system is used in conjunction with a RO water purification system, much greater efficiencies can be made all round. Reverse Osmosis and Arvia’s Nyex™ systems are complementary as they concentrate on different classes of compounds that can be removed from water. Our systems can either be used upstream of RO, in which case they’ll reduce membrane fouling and increase service life appreciably, as they can be harmed by organics that Nyex™ removes. This results in less downtime and less membrane washing, saving time and money.

As an alternative, Nyex™ systems can be used in the reject stream from an RO plant and therefore work more efficiently to treat water that will be discharged.

Applicable industries for ZLD include industries which consume a lot of water. For example, semiconductor industry, packaging (metal processing and pulp and paper), pharmaceuticals and some specialty chemical production.

A prime example is the pharma industry which can benefit from the new generation of industrial water treatment systems like Arvia’s.

One important issue challenging the whole of medicine is AMR (anti-microbial resistance) where medications like antibiotics lose their efficacy; this is quickly becoming a critical issue in the treatment of several conditions.

The reasons for this are well-known; the result is that various harmful compounds may eventually end up in leachate and in time, groundwater.

But crucially, millions of people worldwide depend on medications like antibiotics meaning there is a constant demand and the processes that create them can’t be changed overnight.

One compound that we’ve had a lot of success with removing is Triton X-100 – a surfactant, or non-ionic detergent used in some antibiotics as well as medicines and proprietary products – even some cleaning products.

The EU effectively banned it in 2012 (part of the REACH list) but as we know, it takes many years to actually stop using a product of this nature as it’s constituent in the making of so many different manufactured goods – even one flu vaccine.

The reality is that in the case of medicines, each manufacturing process for each product will need to be proved and tested with a suitable replacement for Triton X-100 before it can be re-certified, which can take some years.

The upshot is that Triton X-100 is still currently licensed for manufacturing some legacy products, albeit under very strict regulations in terms of effluent levels – something that pharma companies have to keep a close eye on. 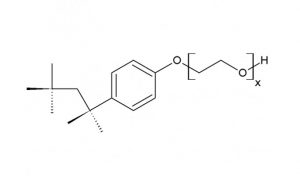 Removal of Triton X-100 from water

The patented Arvia system is extremely efficient at removing organics from water. Its unique Nyex™ technology will remove Triton X-100 down to below the limit of detection – in this case that was 0.1 parts per billion. And it does that efficiently without creating masses of toxic sludge that will need removing and treating off-site. Check out the case study.

Arvia is a water ‘polishing’ system. We get the water after conventional filtration has finished with it, and our systems can be retrofitted to many wastewater reuse systems, or installed as a stand-alone plant. In some conditions, Arvia can produce water so clean that there’s actually no requirement to discharge it – it can be good enough to use again.

Today, Arvia’s technology makes zero liquid discharge technology a possibility for many more industries and manufacturing processes.  Long-term, it will save them money and deliver greater water security – increasingly important in the coming times of water stress.

Talk water technology with us

We’re especially keen to talk to more companies in the specialty chemical, pharma, agrochemical and semiconductor industries, as we know we’ll be able to do something great with your water – to help you to comply with current and future regulations, and to do your bit for our environment by reusing water and aim for zero liquid discharge.

To have a more in-depth conversation with someone who’ll understand the chemistry of your organisation’s water problem, CONTACT US TODAY.