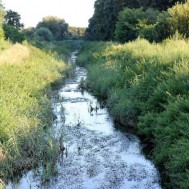 Due to the development of advanced methods, water pollution can now be analysed more effectively and the scale of low-level contamination has been revealed.

Pharmaceutical and other chemical waste in European rivers is an endemic problem which is finally reaching the political agenda. A group of scientists from the Greenpeace research laboratories at the University of Exeter conducted analyses on 29 small waterways across 10 countries in the European Union. This work has resulted in a comprehensive determination of 275 pesticides, including 24 that are actually banned in the EU. 101 veterinary drugs were also detected in the waters and the most common were antibiotics – dicloxacillin was present in two thirds of the analysed samples.

The chemicals found in our waterways originate from several sources. Endocrine disrupting chemicals (EDCs) interfere with the way the body’s hormones work. They are found in pharmaceuticals, industrial chemicals, pesticides and plastics and can make their way into natural waterways through manufacturing effluent, land run-off or excretion when wastewater is not adequately treated.

Worryingly, approximately 1,000 chemicals have been reported to potentially have endocrine disrupting effects with many of these commonly found in consumer products which are available to buy on the shelves.

Another sobering concern over pharmaceuticals in the environment is the development of antimicrobial resistance (AMR). The threat to human health from AMR could not be more serious and it is growing. In 2016, according to the World Health Organisation (WHO), 490,000 people developed multi-drug resistant tuberculosis globally and drug resistance is starting to complicate the fight against HIV and malaria as well.

It is well documented that the use and overuse of drugs, especially antimicrobials, in both human and livestock populations has increased globally. Combined with inadequate treatment and separation of wastewater streams, drug-resistant strains of bacteria have spread to drinking water, food sources and the wider ecosystem; directly affecting the health of humans and survival of other species.

With these challenges already being experienced today, it is necessary to remove chemicals wherever water is abstracted for human or animal use as well as before industrial effluent is discharged into the sewer or environment.

It is now possible for industrial manufacturers and water companies to install on-site specialist packaged technologies like Arvia’s Nyex™ treatment system. The Nyex™ process retrofits into existing treatment trains to improve treatment efficiencies and prevent recalcitrant compounds from mixing and reacting with one another in final effluent or the environment; and thus, becoming even more complicated to treat.

Nyex™ combines adsorption with electrochemical oxidation in a single, scalable unit that is easy to operate and can be remotely monitored for complete peace of mind. The process simultaneously localises and mineralises organic contaminants into H2O, H2 and CO2, requiring only a low electrical current in proportion to the loading of contaminants, for effective removal.

The system is free from chemical dosing, has a self-regenerating media and does not produce sludge. This results in sustainable, low-maintenance operation with considerably lower recurring cost than trucking, incineration or landfill of secondary wastes.

A sample of the treatment efficiency results are detailed below on a variety of compounds which are commonly found in waterways.

Comprehensive removal of various micropollutants > 90%, often to below the limit of detection (LOD) was achieved.

As large water users and potential contributors to water contamination, industries including pharmaceutical, chemical and personal care manufacturers have found themselves under scrutiny on this pressing issue and are adopting sophisticated water management plans with the objective of cutting pollution and reusing water.

Arvia are in the process of supporting several major players in these industries to analyse and remove organic contamination and protect our finite water sources.