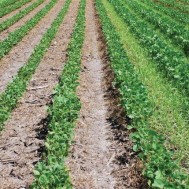 Atrazine, 6-Chloro-N-ethyl-N-isopropyl-1,3,5-triazinediyl-2,4-diamine, Residox, Primatol A, is a synthetic substance from the Triazine substance group and is developed as a selective herbicide which works by interfering with a plants’ energy production process in order to prevent the spread of weeds in the agriculture industry.

Atrazine is listed as a Red List pollutant in the UK, meaning that its presence in the environment is of particular concern. The herbicide has not had approval for EU use since 2004 over groundwater contamination fears. Specific regulations and directives covering Atrazine are as follows:

It is also listed as a priority substance under the UK Water Framework Directive.

After leaving the EU, the UK government could allow dangerous pesticides and herbicides banned elsewhere in Europe to be used in the UK. This is of particular concern as recent research suggests that Atrazine could be harming male fertility by reducing sperm counts in Australia, where the substance is still commonly used.

The Pesticide Action Network UK (PAN UK), which advises on alternatives to herbicides and pesticides, and works towards affecting UK policy post-Brexit are making efforts to support the UK in becoming a world-leader in sustainable agriculture. Organisations like PAN UK mark a shift in widespread efforts to protect not only our environment, but also our own health in the long-term.

The main challenge is that pesticides and herbicides not only enter the environment and ground water supplies when used for agricultural purposes; they also enter waterways during their manufacturing processes within industrial effluent. As analytical capabilities of water continuously develop, even trace parts per million to parts per billion levels of harmful chemicals can be found in waterways after not being adequately treated by their manufacturer or the wastewater utility which collects the effluent for treatment.

At Arvia, we work to eradicate chemicals in water like Atrazine, which are having disastrous impacts by residing in our water sources. Often, our Nyex™ treatment systems are best placed at the industrial manufacturing facility, to remove contaminants at their source. Clearly, once these contaminants enter the environment, they become much more widespread, interacting with other contaminants found in waterways and are therefore much more difficult to analyse for and remove.

During recent treatability trials with a UK utility, we were successful in removing Atrazine Desethyl and Atrazine Desisopropyl from 0.003 PPB and 0.01 PPB respectively to below the limit of detection.

Further client work by Arvia conducted on pesticides to below ‘no-observed-adverse-effect-level’ (NOAELs) can be found in the list below:

For more information on other projects we have managed on similar contaminants or how we could support an upcoming project, please get in touch with one of our Process Engineers on
+44 (0) 1928 515 310.